LEGO recently introduced a new LEGO set called Research Institute which featured three female scientists. Since my wife is also a female scientist, I tried to order one from the LEGO website only to learn that they had sold out in less than a day. I then wrote an email complaining about this to LEGO who responded by sending me an apology note and a catalog.

I grew up playing with LEGO sets, hard to avoid when you were named Zach and commercials like this dominated the airwaves. Anyways, when I was a kid my dad once mentioned to me that a good rule of thumb for determining the price of a LEGO set was to estimate each brick costing about 10 cents. This new catalog made me wonder if this was still true. I copied all the model numbers as well as the number of pieces and the prices. I was also curious in how true this trend was when adjusted for inflation so I used the CPI Inflation calculator from US Bureau of Labor Statistics which showed that $0.10 in 1989 had the same buying power as $0.19 in 2014. Ideally I could have found a catalog from 1989 but I don’t remember any back then and I probably would have cut it up to put pictures in my locker or something like that. I used R to plot both of these trends and it appears that my dad’s estimate still holds true for 2014. 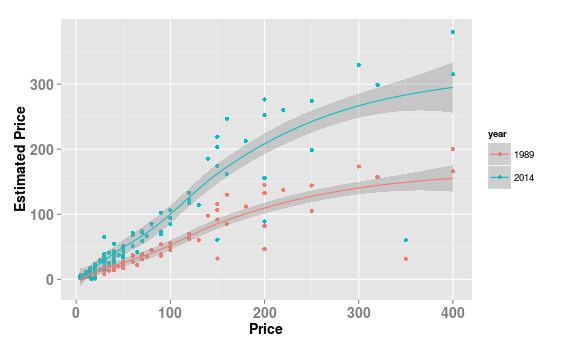 A correlation calculation for all sets gives a value of 0.91 which means my dad had a pretty good estimate back in the day.

I also looked at the average price for each collection and found that almost all collections retained a high correlation between the estimated price and the actual price.

Raw data and code for this lives at this gist