Recently, there was a post on Priceonomics about traffic circles with the argument that roundabouts are safer, help improve traffic flow, and reduce emissions. The post mentions that there are 3700 roundabouts in the United States, which made me wonder - how many of those are in Seattle?

I used the sp library in R to read in both sets of shapefiles and quickly determine the streets with the highest number of roundabouts:

Fremont Ave N. has a whopping 27 traffic circles which seems excessive until you realize that most of these are North of the zoo and not in the denser southern part of the street.

I thought quite a bit about how to best represent these values and ultimately settled on mapping streets colored to the number of traffic circles on that street. I used R and Color Brewer to make a color attribute for the map based on traffic circle count that could be read by Leaflet. I wrote out my GeoJSON files using rgdal::writeOGR() and then found that was way too slow to reasonably run in a browser so I converted it to topojson using topojson -o colored_traffic_circles2.topojson -p color colored_traffic_circles.geojson. Even this ran too slowly so I had to reduce to streets with more than two traffic circles. 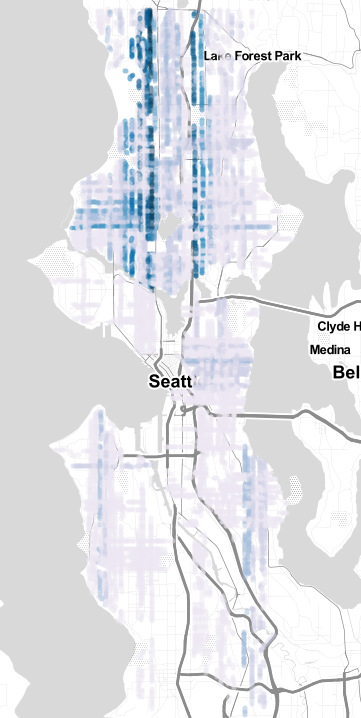 Here the darker the color, the more traffic circles present on that street. For me the most interesting feature is how many traffic circles in a N-S direction are right next to State Highway 99 or near I-5. Is this an attempt to mitigate traffic of people trying to use surface streets instead of arterials? Possibly, though difficult to determine. Regardless, 1042 is an impressive amount of traffic circles for a metropolitan area this large.